“The UK seeks to lead by example on Climate Change.“

Last year the British government announced an ambitious new goal to reduce green-house gas emissions by at least 68% by 2030 compared to 1990 levels.

This interview is also available in German

Great Britain was hosting COP26 in Glasgow this year. Experts recognize the UK as first mover in concerns of climate protection. With the “Climate Change Act” the United Kingdom set its goals for the reduction of greenhouse gases in 2008. Last year the British government passed a Ten-Point Plan for a green industrial revolution. In this context Brexit becomes important as well. Jill Gallard, British Ambassador to Germany, explains what small and medium-sized enterprises (SME) can expect.

Mrs. Gallard, what are the main climate policy goals of the UK government?

The UK seeks to lead by example on Climate Change. Since the 2008 Climate Change Act we have seen a number of significant developments:

In his Ten-Point Plan for a green industrial revolution the Prime Minister set out an innovative programme of green growth and job creation. Covering clean energy, transport, nature and innovative technologies, the plan will mobilise £12 billion of government investment to support highly-skilled green jobs, and spur private sector investment. It seeks to promote green technologies such as hydrogen, and aims to halt the sale of new petrol and diesel cars to 2030.

More recently, on the 19th October, the UK also published its long-awaited Net Zero Strategy. This lays out a comprehensive set of measures to reach net zero by 2050 while strengthening our position in the global economy. It explains how the UK will cut greenhouse gases, secure our energy system, attract investment, create jobs and lead in the low carbon economy. It covers the key emitting sectors in the UK – power, industry, heat and buildings and transport. It also includes sections on natural resources and innovation, as well as a commitment to decarbonise the UK’s electricity system by 2035.

All these ambitious goals build on strong foundations. Between 1990 and 2019, the UK economy grew by 78% while emissions decreased by 44% - clearly demonstrating that clean growth presents one of the most significant economic growth opportunities of the 21st century. Moreover, the targets and policies are based on the best available science, set out by independent scientific advisers - the Committee on Climate Change.

What chances and obstacles will Brexit cause for British climate goals?

The UK’s commitment to tackling climate change is unchanged by EU Exit. The UK is continuing to lead in this area, backed up by ambitious legally-binding domestic action, international climate finance commitments, and climate diplomacy efforts towards COP26. As COP26 Presidency, the UK has been working closely with all countries and groups across the world on climate ambition - including a strong partnership with the European Union and its member states such as Germany.

The UK was hosting COP26 in Glasgow this year. What role took Great Britain in negotiations on the conference?

The UK was very proud to host the COP26 Summit in Glasgow, in partnership with Italy.

We are using the power of a fair and inclusive Presidency to bring governments, business, and civil society together to drive action across key sectors of the economy. Our four main goals for COP centred on reducing emissions, mobilising public and private finance, adapting to the effects of climate change, and collaborating across society.

There were achievements on several issues: New commitments concerning net zero emissions that at least bring us closer to the 1,5 degree goal. The UK encouraged the formation of new alliances. Ambitious goals were set on phasing out coal, end of deforestation and financial support of fossil projects. As a host, our most important contribution was to initiate and accelerate change in real economy. Further, we managed to finalise the outstanding elements of the Paris Agreement so it can finally be implemented. Overall, I consider the Glasgow Climate Pact a success. Now, it is important that we translate the commitments made during COP26 into rapid action.

SMEs fear that the EU-UK Trade and Cooperation Agreement (TCA) will result in more bureaucracy. Will german SME face more restrictions or obstacles by entering british market because of climate policy goals of Great Britain?

The UK Government has always been clear that it takes time to get used to new customs rules and processes. We believe it is better for businesses to focus on the route out of the pandemic first, which is why our government gave them more time to prepare for new controls. But we haven’t only done that. We’ve created numerous helplines, email enquiry services, and forums for tailored advice. We’ve been running a comprehensive series of webinars with policy specialists across all sectors in addition to a number of events specifically for German businesses. All of these are designed to support European and German SMEs to continue to take advantage of the opportunities in the UK market.

Ultimately we believe that the policies released to set the path to UK Net Zero by 2050 will provide an increased number of opportunities for German SMEs, making any initial extra effort well worthwhile.  The PM’s 10-point plan for a green industrial revolution will mobilise £12 billion of government investment, potentially releasing 3 times as much from the private sector leading to a whole host of opportunities for German companies in the low carbon sector, with a solid pipeline of projects and stable legal environment.

A host of strategies have been launched this year to implement that plan. UK’s Industrial Decarbonisation Strategy from March is aiming to deliver the world’s first low carbon industrial sector, with over £1 billion allocated to drive down emissions from industry and public buildings like schools, hospitals and council buildings

The UK Hydrogen Strategy from August is supporting 5GW of low carbon hydrogen production capacity by 2030 and will scale up production and stimulate innovation, decarbonising transport, power and industry.

In October 2021 the Heat & Building Strategy was launched to address the emissions of the ca. 30 million buildings in the UK, which contribute to almost 25% of UK emissions.Last not least, the Net Zero strategy also from October is giving a clear market signal for businesses, certainty to invest, grow and build ambitious new projects in the UK.

How should German SME prepare their business activities in the UK given British ambitions on climate protection?

In May, Prime Minister Boris Johnson and Business and Energy Secretary Kwasi Kwarteng called on every small business in the UK to take small, practical steps to cut their emissions as part of the UK’s journey to net zero by 2050 through the new UK Business Climate Hub. While signing up to the Hub is only possible for UK businesses, German SMEs can also use the hub to find practical tools, resources and advice to understand their emissions and develop a plan to tackle them, as well as providing ideas for steps they can take.

The political discourse in Great Britain is currently set around politicial concepts such as „Clean Growth“ and „Green Industrial Revolution“. Please explain these terms and their main features.

Achieving clean growth, while ensuring an affordable energy supply for businesses and consumers, is at the heart of the UK’s Industrial Strategy. The aim is to increase productivity, create good jobs, boost earning power across the country, all whilst protecting the climate and environment upon which we and future generations depend.

It is based on a firm belief that actions to cut our emissions can be a win-win: cutting consumer bills, driving economic growth, creating high value jobs and helping to improve our quality of life.

The “Green Industrial Revolution” as set out by the Prime Minister in his Ten-Point Plan is effectively the way that the UK will forge ahead with reaching its net zero targets. It involves mobilising significant public investment to create and support highly-skilled green jobs, and spuring over three times as much private sector investment by 2030.  At the centre of this are the UK’s industrial heartlands, including in the North East, Yorkshire and the Humber, West Midlands, Scotland and Wales, which will drive forward the Green Industrial Revolution and build green jobs and industries of the future.

Thank you very much for your answers, Mrs. Gallard! 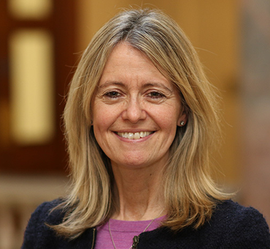