Chinas Energy Transition: Problem or Possibility for the German Mittelstand?

This article is also available in German

Energy is a ‚hot topic‘ in China. Energy supply still depends heavily on coal. Recently Chinese gouvernment set the goal to attain carbon peak by 2030 and carbon neutrality by 2060. Time will tell if the Chinese environmental and climate resolutions will cause fair competitive conditions for German small and medium-sized enterprises (SME).

The Chinese Belt and Road Initiative (BRI), when it was first announced, was greeted with a measure of ambivalence and distrust. World leaders, including the German, French and British, opted not to sign the original joint-communique.1 More recently, this conversation about the BRI has become tempered with pragmatism.2Realpolitik, as the Germans might say. What follows are two illustrations of how this pragmatism could work in practice - serving the dual goals of the environment as well as German business interests.

The most conspicuous outcome of the BRI, for German freight, will be the shift from air freight to rail and shipping. Generally, this will mean a reduction in CO2 emissions of nearly 25 tonnes for every shipped container (TEU equivalent) between Germany and China.3 Indeed, even as I write this piece (27.10.2021), EU representatives of the Transport and Tourism directorate (TRAN) are meeting to discuss the BRI and its implications for transport.

Another example illustrates more concretely how policy makers can adopt a pragmatic approach towards the BRI. Consider a windfarm financed and built under the Initiative. Given Europe’s expertise in harnessing wind power – such an investment might pose a prime target for European service providers who can deploy their services in helping to optimize the energy produced. Importantly, such services represent a valuable source of revenue. This example illustrates the idea of ‘capacity building’, one key way in which firms from the EU can hope to extract value from the BRI. The critical point is that BRI investments do not represent a one-shot-game. Once BRI investments have been made, German service providers can play a role.

Collectively – and at a policy level – this might mean the identification and cataloguing of projects where the scope for participation of the German Mittelstand and service providers, offers the most potential.

Energy is a ‚hot topic‘ in China

Although the BRI has been promoting energy projects (more recently, communicating the intention of China’s ruling party not to finance the building of fossil fuel powered generating stations in developing countries), closer to home in China, energy is a ‘hot topic’. September 2021, saw multiple power outages which affected 20 provinces, temporarily shutting factories or forcing them to cut the working day.

Coal as a significant source of energy

China’s central planning agency – the National Development and Reform Commission (NDRC) – issued a directive to accelerate the transportation of coal. China remains heavily dependent on coal-powered energy. Electricity generated from coal comprises 56 percent of China’s power.  In terms of overall consumption, China is ranked Number One in the world. But China’s stocks of coal have been fluctuating, plunging to a record low this September.4 China’s recent energy problems have been triggered by a range of factors. Probably, the most critical is China’s published goal to reduce carbon intensity (compared to 2020 level) by 18 percent by 2025, attaining carbon peak by 2030 and carbon neutrality by 2060.5

This aspiration to achieve carbon neutrality has spawned a set of new regulations, some of which target the coal-powered generators. A further aggravating factor for China’s energy sector is demand fluctuations in the wake of the Covid pandemic. Now that world consumption has begun to recover, energy production has not been able to keep pace with this hike in demand.

What are the implications for German and European firms of these power outages? Affiliates of MNEs located in these affected provinces, are as vulnerable to power outages as local firms. Firms involved in heavy industries (e.g. cement manufacture) are most severely affected, since their production processes are most reliant on energy. However, most firms with German ownership do not fall into the category of heavy industry. Nevertheless, these interruptions to production and services are worrying.

This brings us back to one of the main reasons for the power outages – China’s self-proclaimed agenda to achieve carbon peak by 2030 and carbon neutrality by 2060. The environmental resolutions spelled out in the 14th 5-year plan – seem to be gaining traction – at least, on the basis of the role of environmental regulation in intensifying the power outages. So how deep-cutting are these environmental resolutions? How do they compare to Germany’s Green Economy initiative? The truth is, comparisons are not easy to make.

The German Mittelstand pays among the highest prices in the world for its electricity, as revealed in a Bundesministerium für Wirtschaft und Energie (BMWi) report, co-authored by the Kiel Institute BMWi, 2020. These high energy costs, owe much to Germany’s tax for renewables (EEG-Umlage). Germany’s unilateral adoption of regulations such as the EEG, represented a risky step for the competitiveness of Germany’s Mittelstand. This is why countries typically try to avoid ‘going it alone’, minimizing the competitive pressures on their industry. For this reason, the resolution of China’s ruling party to incentivize the transition towards carbon neutrality, is to be welcomed. China’s transition to green energy, if it leads to a convergence in energy prices and a competitive alignment with Germany’s high-tax energy agenda, can only be a good thing. But only time will tell.

3 Report by the European Parliament, 2018

The Economist, “What is China’s belt and road initiative? The many motivations behind Xi Jinping’s key foreign policy”, May 15th 2017

Hanley, A. (with L. Du and C. Wei),  ‘Estimating the Marginal Abatement Costs of Carbon Dioxide Emissions in China: A Parametric Analysis’), 2015, Environmental and Resource Economics, 61(2) 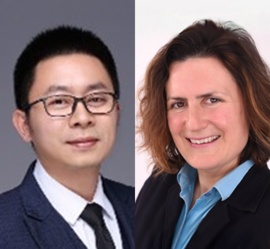 Prof. Aoife Hanley has worked at the IfW since 2008. She has investigated the marginal cost of CO2 reduction in China’s coal-powered generators. She has recently contributed towards a section on Energy, the Climate and Environmental Protection for the Federal Ministry for Economic Affairs and Energy of Germany (BMWi, 2020, „Analyse der industrierelevanten wirtschaftlichen Rahmenbedingungen in Deutschland im internationalen Vergleich“, 29.05.2020).

Prof. Limin Du has worked at the Zhejiang University since 2010. He has investigated the carbon efficiency, productivity and marginal abatement cost of China. He has recently devoted himself to study of regulation, international trade and environmental pollution of China.